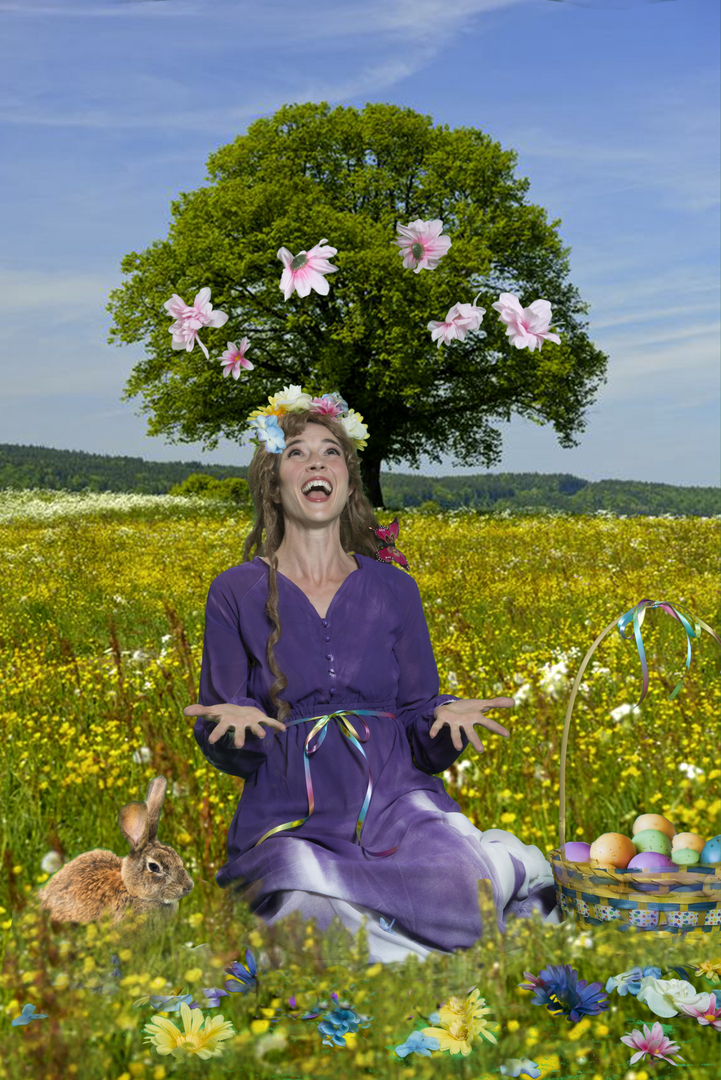 THE GODDESS PROJECT: Made in Her Image
ÉOSTRE

My 1st birthday was on Easter Sunday (as was my half-sister’s), so I guess that’s why I’ve always LOVED Easter and Springtime. Pastel colored decor, chocolate eggs and plushy bunnies were Heaven to me. I delighted in our new lightly colored dresses (that my mom made) with matching accessories and we’d celebrate: eating a special feast after searching the yard for hard boiled eggs that we’d dyed the night before, ritualistically.

And I loved to go to church on Easter morning, EVERYone in the town was there – in their new clothes! Sometimes we would take our new Easter baskets (complete with the plastic grass) to church egg hunts; everything was so fresh and new and hopeful and springing with life.

But then there was that HORRIFIC middle part of the service sermon – about blood and 9 inch nails and everything gruesome that had happened to the nice guy that this whole day was supposed to be about. Immediately following that speech, we’d sing more jubilant songs while admiring the ornamentation of lined up lilies. After the service we’d carry right back on with our JOYFUL HOLYday.

It never felt right to me. It was uncomfortable and awkward and unnatural, that contradicting sad service with the ethereal fun of the season.

Come to find out – Easter existed as this inspiring Pagan (which means: “people of the land”) festival ushering in the season of re-birth, LONG before Jesus was even born. And the center of these joyful rituals was giving gratitude to the Easter Goddess, ÉOSTRE!

For MUCH longer than 2,000 years, painting Easter eggs, decorating with baby chicks or bunnies and wearing pastel colors has been a tradition in the Springtime. Europeans once held yearly festivals to Éostre (pronounced “Easter”) at dawn on the Vernal Equinox, which is where they got the name “Easter”. This Saxon Spring Goddess’ name means DAWN, as in the SUN RISES IN THE EAST.

Éostre, also called Ostara, Oéstre, Estre or Easter, is the Goddess of fertility, new life, flowering plants, the birth of both human and animal babies as well as bringing lighter and longer days.

The rapidly reproducing RABBIT is Her mascot of fertility.

In Germany, EGGS have been decorated for thousands of years in Her honor.

PASTELS were worn as the in-between colors between the muted winter whites and greys and the bright, vibrant colors of summer.

Meals were shared, including HOT-CROSS BUNS that represented the 4 SEASONS and 4 PHASES of the moon that these ancient people’s livelihood depended on.

April was originally named after Éostre, as She was “celebrated in the forth month of the year”, writes Patricia Monoghan in her book, THE NEW BOOK OF GODDESSES AND HEROINES.

Not so curiously, Éostre was DELETED from all written history except for ONE monk (Bede the Venerable’s) journal in the 6th century. This all-providing, rebirthing figure of the FEMALE CREATOR, was all but lost. But we reclaim Her now.

Our bright and brilliant (and newly engaged) Easter Goddess model, Erin, is a compassionate, nurturing soul – a true goddess. With eyes that could melt any heart, she is also one of the smartest people I know (she was valedictorian!)

About joining The Goddess Project: Made in Her Image Erin says: “Devotion to the Divine Mother runs in my family. I still have my Memaw’s statue of the Virgin Mary and my mom’s rosary. Though not a complete picture of the Divine Feminine, Mary served as a valuable female role model for me in a largely patriarchal tradition. As I grew, researched, explored, found yoga, and then began to teach it, I realized that the Goddess has many faces.”

You might not recognize Erin in this Goddess incarnation, but she also portrayed our ISHTAR. http://freesophia.com/sparklesishtarsparkles/

Special thanks again to David Clanton of davidclanton.com, this photography and digital enhancement.

See FreeSophia.com or the Facebook Free Sophia Page for more on THE GODDESS PROJECT: Made in Her Image!