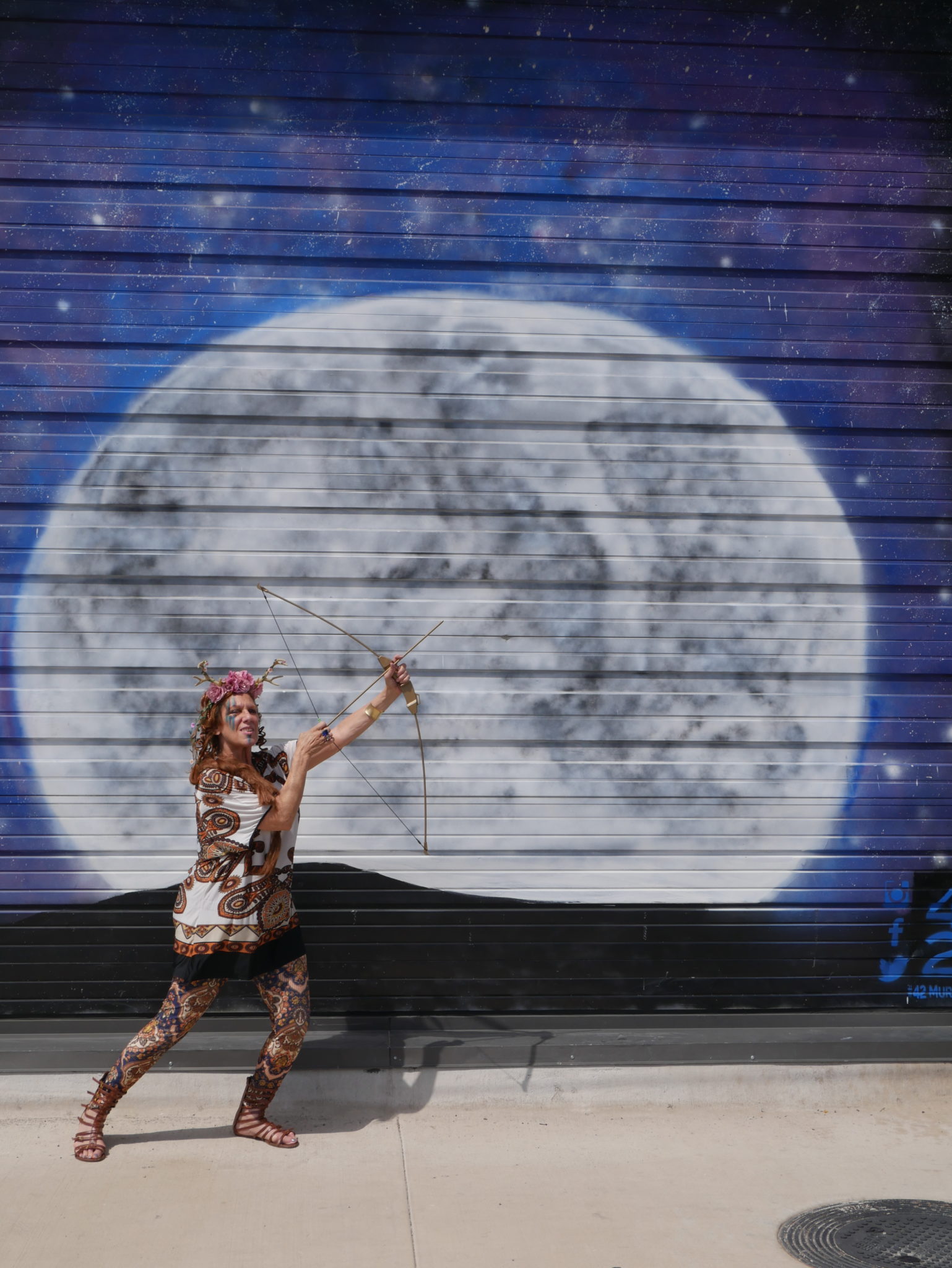 
And when She has had enough
of looking for animals, this huntress
when her heart is elated goes
to the Great House
in the fertile grasslands of Delphi
and there She arranges
the lovely dance
of the Muses and Graces


She takes first place
at the dance
and begins


With Heavenly voices
they all sing.


-From Hymn to Artemis in Homer’s Iliad

When I was a young girl in Girl Scouts, I remember camp outs when some of the mother’s said things unclean and would wave their arms around freely and touch branches. I was appalled and excited.  I’d never seen grown women act that way, although I enjoyed being out in the woods alone all day by myself. In my twenties, I would read SARK’s Succulent Wild Women and begin to re-teach myself how to go back to that freedom.

Artemis is the Greek Goddess of the hunt and the MOON.  She was the great Archeress, gifted Her GOLDEN BOW AND ARROW  by the Cyclopes.  Racing hunted animals under the full moon, Her name means “Bright one”, for She is the Moon. Artemis is Goddess of the hunt and the hunted, She embodied both so that there was never any suffering and yet food, clothing and tools were always provided.

“Lovely You are and kindto the tender young of ravening lions.For sucklings of the savagebeasts that lurk in the lonely places you have sympathy.”

First born twin of Leto and Zeus, Artemis was said to have been her mother’s midwife during twin Apollo (the Sun God’s)  birth and She therefore also became Goddess of childbirth and children.  Having no children Herself, Artemis was the blessed untethered Maiden Goddess of many a man (and Greek God’s) desire always with Her wild dogs by Her side.

Since a nursing mother bear is the fiercest of all creatures, as a matter life and death, Artemis was also seen in that way.  As Baring and Cashford write in The Myth of the Goddess: “As the ‘Bear-Mother’, She also nursed the newborn infant, where instincts of Nature take over.” Festivals were held for Her in which little girls would dress and act as SHE-BEARS, called “Arktoi” and would dance and enjoy their wildness.

“As soon as I was 7 I was an arrhephoros (sacred basket carrier). Then at 10 I was an aletris (miller of corn) for the foundress, and shedding my saffron robe I was an arktos (bear) at the Brauronia.”

There are MANY temples to Artemis throughout Greece and Turkey (ancient Anatolia), still remaining today.  “At Ephesus in Ionia, Turkey, Her temple became one of the 7 WONDERS OF THE WORLD.” -Wikipedia. And ancient statues of Artemis remain in major art museums around the world today.

Strong in body and in will, Artemis wouldn’t have liked all of the attention around the famous space missions being named for her twin.”105 Artemis, the Artemis (crater), the Artemis Chasma, the Artemis Corona, and the Artemis lunar program have all been named after the goddess. NASA is calling this the Artemis program in honor of Apollo’s twin sister in Greek mythology, the Goddess of the Moon.” Also, Wikipedia.

Perfect to portray Artemis for the Goddess Project is the gorgeously untamed and transcendent Tzivia, who was 66 years and 6 months the day of her photo shoot. Read what Tzivia has to say about preparing for her role:

As Jean Shinoda Bolen identifies:   “Every woman has the leading role in her own unfolding. These powerful inner patterns – or archetypes—are responsible for major differences among women“.    My archetype – Artemis – Goddess of the Hunt, Protector of the Young has been my raison d’être since I grew up with an angry older brother.  I protected my younger brother, and was a brave huntress – looking for ways out of an argument or fight, and I was the animal lover in the family.

My attitude has always been of an independent, not ready for marriage until I was into my 40’s.   Artemis functions as “Lady of the Wild Things”, and that I was.  As a youth, I loved going into Manhattan, NY to visit the east village: I saw Andy Warhol, Studio 54, and was in many an ‘independent’ movie – getting up at dawn, driving up to upstate new York, donning my clothes and meeting the sun on a cold winter day… along with other young adults.  I took my wild side to the stage and art school.  As an independent, I chose to ‘mother’ other projects and people’s children.  I chose a husband who lets me go-and-do and stands by my side as an equal and opposite.  Youthful in energy, even as I get into my ‘crone’ years,  I still love the ‘forest bathing’ and dream up new ideas for my ‘wildwomen’ groups.

Tzivia (Zebra Victor) has been a sculptor, performance artist, singer of jazz, social worker, yoga teacher and Psychodramatist.  She holds  Reiki Master energy and has been in practice with InnerBeingHealingArts.com for several years; offering women’s active-support groups, yoga classes, psychodrama and 1:1 therapy.

Thank Tzivia for bringing your Power and Grace to the project!

For more on the Goddess Project, go to FreeSophia.com or our Free Sophia Facebook page.  The book version of THE GODDESS PROJECT: Made in Her Image JOURNAL JOURNEY now available.  Also, see Artemis in the GP 2020 Calendar!

4 comments on “THE GODDESS PROJECT: Made in Her Image. ARTEMIS”